On 17 April 2021 Bob Dignen gave the workshop “Language to Leadership: A hands-on approach to soft skills and leadership development for ELT professionals”. Not only ELTABBers but around 50 trainers from various cities and ELTAs across Germany attended. What great networking online delivery gives us!

The main theme Bob imparted to us throughout the workshop was supporting leaders to deliver results. He wants us Business English Trainers to delve more into this area so that we, too, may assist our clients better in achieving this.

What makes a leader?

The first point of Bob’s agenda was the question: “Who leads?”

Bob gave us the following input before answering the question:
In the title of the workshop Language to Leadership, we see a reversed take on a book written by L. David Marquet, a submarine commander, entitled “Leadership is Language: The Hidden Power of What You Say and What You Don’t”.

Marquet explains the difference language can make. Understanding this can empower a team to make better decisions and to take greater ownership. This point of the book is the link for us as language trainers to the topic of leadership. (For more information on the author, check out this interview with Marquet).

Bob then used a spin off from the famous axiom by psychotherapist Paul Watzlawick, “You cannot not communicate”. The idea is that humans communicate as soon as they perceive each other. From this it follows that every kind of interaction is communication.

You cannot not lead.

What is leadership then?

The next point on Bob’s agenda was: “What is leadership?” For pursuing this idea, Bob broke us up into groups for the following exercise. We were to choose an animal associated with leadership and think of three key characteristics. We then shared our choices in the break-out groups and then in the larger group. This was a good introduction to kicking around the concept of what is leadership.

This type of exercise is important when starting any new project. Clarifying what team members actually understand of the language used for the goal of a project can be crucial to the success of a process. 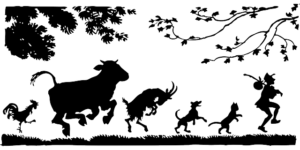 Afterwards, Bob defined leadership as a group of individuals going in the same direction.

A brief History of Leadership

We were given a quick historical overview of leadership concepts, including:

In the present age of globalisation and digitalisation, other new leadership models are emerging such as Ram Charan’s idea of A ‘Leadership Pipeline’ for leading teams, multiple departments, leading a group of leaders and the scope changes as people rise in an organisation. A series of videos can be found on YouTube.

Essentially all leadership comes down to feedback and realising it must be gathered again and again.

Different Types of Leaders and a Paradigm Shift

A new paradigm of leadership is presently emerging and it is not yet clear how this will evolve. Simon Western’s work “Leadership: A Critical Text” gives us three models (all of which may be operating parallel in the same organisation).

The fourth – emerging – paradigm features the Leader as Eco-Integrator. It is based on democracy and aligning networks of people. It also incorporates systems theory for managing complexities.

Another brand-new idea is remote leadership as given in the article “Leadership one year on: so remote, and yet so close” by Mark Dekan, CEO of Ringier Axel Spring Polska that appeared in the Polish version of Forbes magazine.

Bob’s next question was: “What about international leadership?” He spoke of looking at competence sets that deal with the global and the personal response to ambiguity, world markets, and inter-human dynamics.

Now we came to the more hands-on part of the workshop by Bob using a case study about Kai Bendix, General Manager of Nivea Beiersdorf in India, for investigating his next agenda point:

“What is good leadership?”

After viewing Kai operating in India we had to identify three challenges he had and what competencies he possessed when dealing with these. We did this in break-out groups and then gave feedback in the big group.

Suspense mounted – Bob showed us Kai’s prior experience in Bulgaria where he had been successful. After viewing the video about Kai being a Nivea managing director in Bulgaria, we formed breakout groups and analysed his challenges, his influencing strategies and the solutions he found.

We discussed this again in the big group.
The third part of the case study was back to India and what Kai did in the end. We discussed whether this matched our expectations or if there was a twist we had not thought of.

The workshop ended with Bob posing the final point of his agenda:

“How do you feel about delivering leadership training?”

Final Thoughts about the Workshop

Many times throughout the workshop Bob encouraged us to evolve with him and feel more comfortable in dealing with leadership in our teaching and training.

We learned how complex international collaboration means taking action, finding solutions that comply with ethics and laws, being transparent, and managing loss of face. We saw how different forms of communication influence outcomes, and how to create trust and find the right balance in amalgamating conflicting cultures.

For those interested in becoming a Leadership Trainer, Bob has just the right training course for this
qualification and reminded us that higher fees can be charged in going in this direction. If interested, please contact him at bob.dignen@ilp.training.

Bob Dignen is the Director of York Associates based in York, UK. He also founded his own organisation International Leadership Performance (ILP). His publications include Communicating in Business English (2003), Communicating across Cultures (2011), Communication for International Business: the Secrets of Excellent Interpersonal Skills – co-authored with Ian McMaster (2013).

Along with contributing to Business Spotlight and teaching at the Gdansk University of Technology, he is also cooperating with an interdisciplinary team who authored Three Pillars of Organisation and Leadership in Disruptive Times published by Springer International Publishing in their series Future of Business and Finance. (See this link for more information)

Have you heard of dictogloss? If your answer is no, don’t worry.
Giving feedback is one of the most underrated parts of language teaching,
As hosts of the Easy English YouTube channel, Mitch and Isi are
IATEFL associate members are groups who are affiliated to the organisation and
What is neurodiversity and how does it affect language learning? How can
This website uses cookies to improve your experience. We'll assume you're ok with this. Unnecessary cookies are disabled. Accept Read More
Privacy & Cookies Policy