What was life like in post-wall Berlin for an English teacher from abroad, in a time before the internet and social media? How have things changed since then? Does British politeness go with Berliner Schnauze? Paul has the answers.

This evening, I’m meeting Paul Hewitson at Café Bleibtreu where he hosts his weekly English Stammtisch. He’s a bubbly, cheerful guy in his 60s and when I asked him for an interview about the old Berlin for the history section, he immediately said yes. Actually, what he said was, “Old? I can do old!”

So we take a dive back in time, as he paints a picture in front of my eyes. How he came to Berlin with his wife in 1990, just one year after the wall came down. That he stayed for two years, living in the East, but working in both parts of the city, mainly near Ku’damm. About his students from East Berlin, who were incredibly sociable and great writers, but terrible at pronunciation, due to a lack of exposure to British radio and television.

And how things had changed when he came back after spending 14 years in other parts of Germany and abroad. He winks, “Es war alles besser damals!” That’s such a German thing to say! His mischievous smile tells me that he doesn’t mean it, though. But it is safe to assume that life was much different back then.

Steady jobs instead of freelancing

Because in the early 1990s, freelancing was considered the exception. Working as a teacher normally meant full-time employment, so that 80 per cent of English trainers held steady jobs at companies. That did not rule out flexibility, though. While working for Linguarama, Paul took his job first from Düsseldorf to Stuttgart before settling down in Berlin.

He still rhapsodises about this, and I can see why. The job came with the opportunity to teach in fancy summer schools in England every year, all expenses paid for by the company, followed by rooftop dinner parties at Christmas time. There’s the scent of nostalgia as he wallows in memories of custom-tailored one-to-one lessons and gourmet buffets in Stratford-upon-Avon.

Meeting fellow teachers and other expats

But now, on one of the bigger questions of our time: was there social life before social media? Yes, definitely! There was just no tweeting about it. Rather, English trainers would meet up casually after work and gather in groups to go to pubs and restaurants together. Companies actively promoted this, so that there was an established culture of after-work-socialising among teachers.

To liven things up, there was another group of expats, namely gasworkers from Northern England who had been invited by the German government to harmonise the gas systems between the East and the West. After work, they would go to Irish pubs. Maybe to meet teachers and brush up their English, but more probably to watch footy on telly and have a drink or two.

It would have been funny if there had been a Berlin Association of English Teachers and Gasworkers. Only that the gasworkers were done working at some point and headed back home.

Much if not all of the above had changed when Paul returned to Berlin in 2006. This time, he came without work and soon realised that full-time employment had given way to freelancing. Thus, job security had not only vanished, but taken with it the old social networks as well.

Luckily, he found ELTABB and became a member. “That was a smart move. I didn’t know then how smart it was,” he laughs. Paul got his first job by word-of-mouth recommendation from another member, doing level tests of English on the phone for a small company. Gradually, more freelance work followed. After some time, he was put in touch with the manager of a major oil company in Schwedt. Being then hired as an in-house trainer for two full days a week turned out to be a stroke of luck, and he hasn’t looked back.

One thing he highlights is that his success was a two-way street. He was very happy to be able to return the favours he got to other people as well. Having been part of ELTABB for twelve years now, Paul especially likes the regular social events and, in recent years, the increasingly younger average age of the members.

Finally, I ask him what he thinks about living in Berlin – a place that is full of notoriously blunt Berliners. Funnily, he has never had reason to complain about the locals. That’s because he appreciates their directness. Like the taxi driver he described his destination to because he did not know the exact address. The man interrupted his empurpled soliloquy mid-sentence, muttering, “You wanna talk or you wanna go?”
Or the woman in the line at the post office replying to the lady in front of her, who had just apologised for stepping on her foot, “I still have another one.”

There is only one thing that bothers him about Berlin, he says. “The inability to queue! If I ever get into an argument, it’ll be because of queuing!”

Paul has been teaching and travelling  across three continents over the last 30 years. He loves a good story and always has one more to tell, just in case you thought you’d heard them all. You can read an interview with him as ELTABBer of the month here.

For more stories from yesteryear with one of ELTABB’s first members, click here. 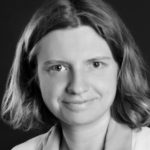 Sandra holds an MA in English, Italian and philosophy and has taught mainly one-to-one in academic contexts. She is the current chief editor of the ELTABB journal. Likes Shakespeare and Venetian lute music. You can contact her under her mail address journaleditor@eltabb.com.

We asked teachers about their funniest experiences in class. Here’s what we got. Clumsy Teacher When

A flashback with member of the first hour John O’Dwyer about his story with ELTABB, teaching

Sandra holds an MA in English, Italian and philosophy and has taught mainly one-to-one in academic contexts. She is the current chief editor of the ELTABB journal. Likes Shakespeare and Venetian lute music. You can contact her under her mail address journaleditor@eltabb.com.

While there are definite advantages to good old-fashioned in-person lessons, the digital
Coworking spaces have sprung up like mushrooms in Berlin over the last
Living and teaching in Berlin is a dream for many English-language teachers.
This website uses cookies to improve your experience. We'll assume you're ok with this. Unnecessary cookies are disabled. Accept Read More
Privacy & Cookies Policy
Necessary Always Enabled
Go to Top

We asked teachers about their funniest experiences in class. Here’s